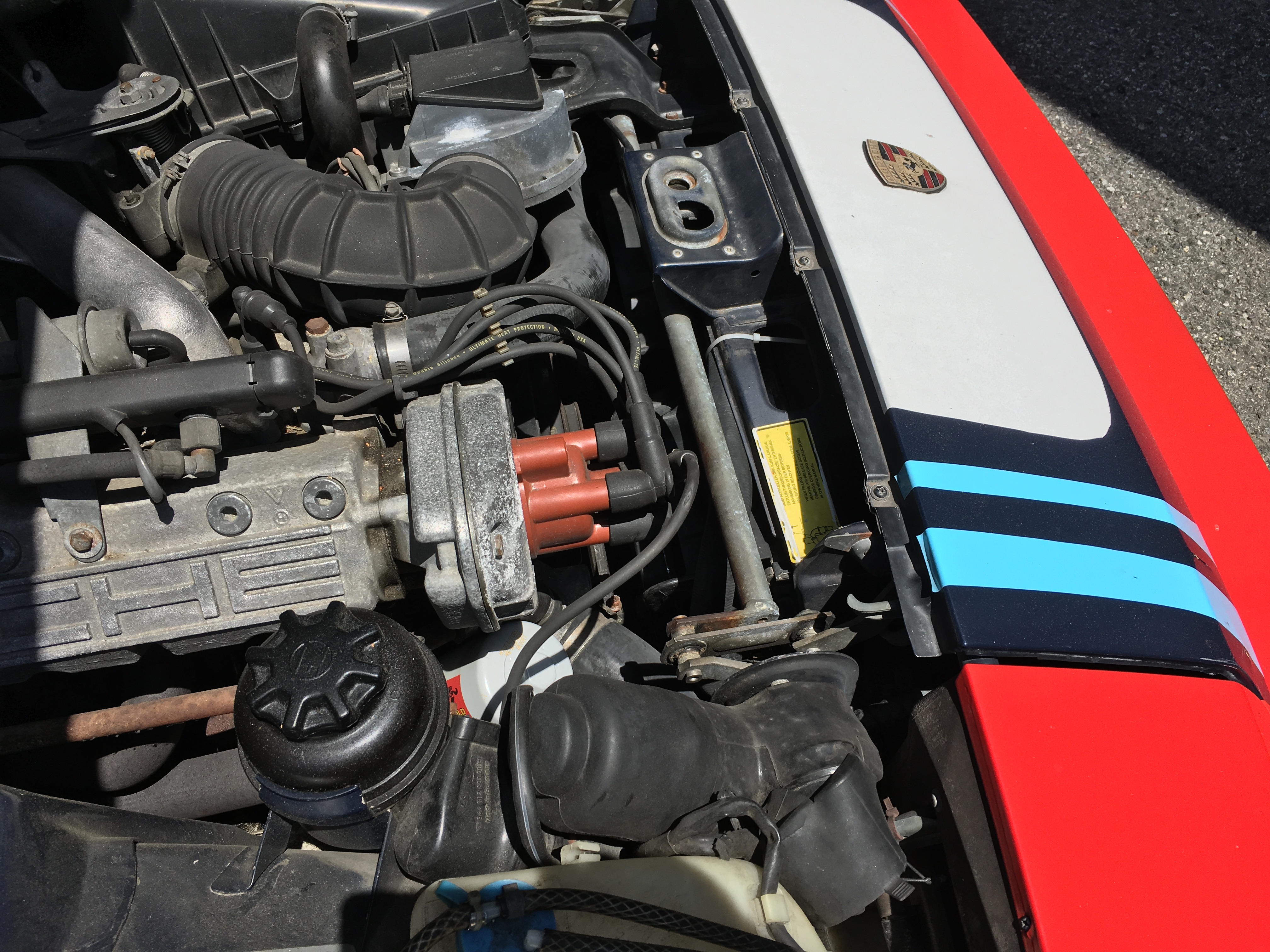 After feet and feet of snow a winter or two ago, it’s quite welcome that summer brings driving weather. At the autocross a while back, though, it was really, really hot–not that I’m complaining or anything. But it was other-end-of-the-spectrum hot. At the autocross, I was lucky enough to bring one recent-vintage car (Porsche 997 Targa 4) and two older cars (1973 914 and 1986 944). Keeping the machinery cool became more of a focal point than when I’m just running the newer car. Even the newer car can hit 250°F+ for coolant temp when running at a race track like Palmer or Thompson on a hot day. Idling waiting for runs at the autocross drives up the temps no matter what, so you get a lot of heat that doesn’t have the benefit of fast airflow like you get when running laps on a race track. So how can we keep things a bit cooler? I had to do some digging to start figuring it out.

I’ve seen some interviews with engine builders and race engineers lately that talk about cars as big thermodynamics problems – managing heat is their number one priority. An engine is basically an air pump. Radiators, intercoolers, and heater/air-conditioners are all heat exchangers. Brakes are basically heat exchangers in a way too. After they convert motion energy into heat energy, of course. And engines like to be the right temperature to run efficiently, so exchanging heat is important. All that heat from combustion has to be dissipated as it is produced or the engine will run hot or overheat. Even more so when you ask for more combustion per second, as we do at the track.

My three track cars were an interesting mix. The temp in the 997 goes a bit high but then stays there. It hits about 250F, which is a bit above normal, but that is where it stays. I can’t say I’m not interested in seeing it be lower, maybe via a 997S-style central oil cooler, but I’ve also seen 997S cars at the same temps at the track so I’m somewhat circumspect about that solution.

The 944 is also water-cooled, but 1986 memories bring me back to the 1964 Ford Thunderbird that I used to have around that time.

It had a 390 cubic-inch motor that made 300 bhp, propelling the lumbering beast to a tested 11-second 0-60mph time. Yeah, it wasn’t fast. Nor is the 944. With a 2.5L normally aspirated motor with a claimed 143 bhp (137 lb-ft at 3,000 rpm) pushing 2,600 lbs, it is really not that quick. The T-bird weighed 4,700 lbs!! That’s 15.6 lbs/hp for the T-bird and 18.2 lbs/hp for the 944! Hard to believe that a big, luxury car from 1964 was theoretically faster than a Porsche from 1986. But the point here is that the T-bird has some major cooling challenges. The motor would get so hot in the summer that overrun became a frequently embarrassing situation. I’d shut the car down, just to have it continue to turn over for another minute or two under it’s own initiative. Yeah, I was cool. Not. The T-bird had a belt-driven fan to help cool the radiator. And it wasn’t very effective. When you shut the car down, the fan would be off too. The 944 has two electric fans. One kicks on to cool the car whenever needed. I need to check it again soon though as I could have sworn it was not kicking in at times when it needed to… The other fan is supposed to kick on only when the AC system is on. [at least that’s what I used to think, but then I learned more later on] I am fairly convinced that the AC system in my car is devoid of function. So I’ve been rather hesitant to even turn it on. I have pressed the snowflake button once or twice, fully expecting to hear some nasty screeching followed by a belt snap, but so far no real drama. But no cold air either. And more importantly, no extra cooling from the other fan that I can see so far.

The 914 is something else entirely. It is an air-cooled flat-four VW Type IV motor (oil-cooled actually), so it really is a different thing. With a whopping 80 bhp (96 lb-ft at 3,500 rpm) pushing about 2,200 lbs, we’ve got a power to weight ratio of 27.5lbs/hp! Really not fast. There is a fan attached to the crank that tries to cool the motor under tins that try to separate the “hot side” of the engine from the “cool side”….although they seemed to forget that heat rises and put the “hot side” on the bottom. According to legendary Porsche engine guy, Jake Raby, the VW Type IV motor runs a bit hot by design since it was meant for wide global adoption. The unfortunate part of my car is that it has no temp gauge so I have no idea how hot she gets! On a day like last Sunday, though, I’m better that she was very hot indeed. Jake also feels the Type IV was one of the most over-built motors ever made and gets about 50 more HP per-cylinder (!!!) from the motors reliably (!!!!). Might have to give him a ring one of these days…

I found my self shutting off the cars between runs to try to keep temps in check a bit. The 944 responded well to being shut down and temps were quickly back in normal range. The 997 never really goes over 250F. Fans kick in to control temps. The 914? Well, who knows? Your guess is as good as mine.

But I’d like the 944 to stay consistently out of the orange zone of the temp gauge (there are no units which is a known issue) if possible. Maybe a replacement radiator would do it? Maybe an external oil cooler or better oil cooler? I believe the stock oil cooler is less a radiator-style unit and more just a bit of coiled hard line that is exposed to air in the front fender well.

I was digging into this cooling issue a bit more recently as the temps climbed and had a eureka moment. My cooling fans were not operating correctly. One fan was coming on – the one on the passenger side. But not the one on the driver’s side. The 944 got a bit complex in the 85.5+ iterations. Both fans should come on low speed when the coolant hits 92ºC (197.6ºF) even if the ignition is off and then both will go to high speed when the coolant hits 102ºC (215.6ºF).  There should never be only one fan in operation, apparently.

When I tried to spin the driver’s side fan by hand, it would not budge. After spinning the other side fan by hand successfully and going out back to my ’83 and spinning both those fans manually without issue, I am guessing the fan motor is toast. Having a spare car on hand is lovely as you can just pull off stuff you need.

I pulled the fans and their shroud out of the ’83 in about 25 minutes. I then pulled the fans and shroud out of the ’86. I switched the good six-blade fan (more efficient than the earlier three-blade design) from the passenger side to the driver’s side in the ’86 shroud. Next, I pulled a three-blade fan from the ’83 shroud and put it into the passenger-side ’86 shroud.

With the ’86 shroud re-installed, it was time for a test. I went to get my kids in Providence but something was still amiss. When I got home, I checked the fuses. And sure enough, fuse 10, the fuse for the primary driver’s side fan was blown. Easy enough to add a new 15 amp fuse.

As I drove this morning, the coolant level definitely stayed lower overall but I did see some spikes to the top line before it goes into the orange. So it’s not yet perfect. With more research, it appears that my low-speed resistors may not be functioning properly and at least one of my fans may not be kicking on in the low speed condition (between 92 and 102ºC). When I went to fix the gaping rust hole under my battery tray that was allowing a deluge of water into my passenger footwell, I recall chunks of ceramic material coming from some discs under there. Low and behold, those are the low speed resistors. Apparently one is intact enough. But I think the other is toast. I just ordered up a used set for replacement. Hopefully that will get us all cool again and ready for more fun!