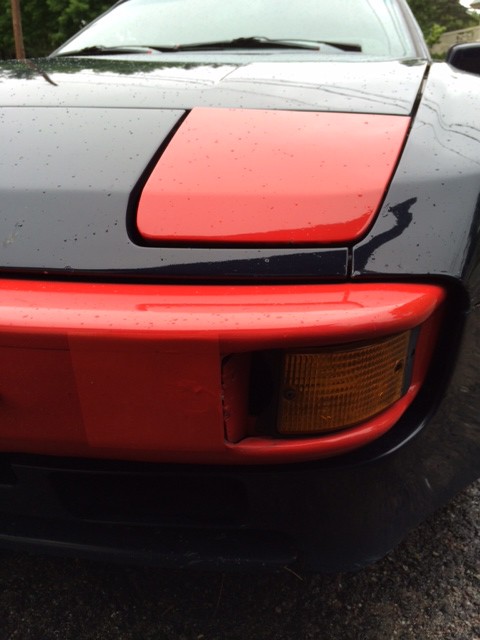 When I was even thinking about getting an old 944, I firmly intended to get it as a car to use and enjoy, not one to baby and worry about. I was maybe going to turn it slowly into a mean autocross car. Or maybe daily drive it in winter as a beater. Or maybe crazy rallycross car with skidplates and rally tires. Or all of the above at the same time! The beauty of the 944 platform is that it has a wide range of capabilities and is a fairly simple car, aside from the motor. It has great handling, no doubt, and has been many things to many people. 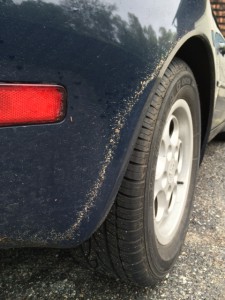 And they are plentiful, which in the Porsche world these days makes them relatively affordable and parts easier to obtain. I am now seeing sad posts where folks are talking about not wanting to being their RS America’s to the track anymore because they are too valuable now. I don’t think that will ever happen to my 944. I got it to be “my Miata” – a small, nimble car that is heavy on fun but light on cost. I didn’t want to have to worry about it being clean or nice. It would just have to run well and be a good driver. 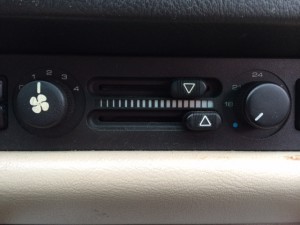 The car I got ended up starting that way perfectly well. Well, the second car I got. The first one is a bit of a total basket case and is going to be a major project to transform into usefulness. But the second one had some cosmetic issues, an obvious leak somewhere (or many somewheres), some mechanical issues, and more. But it ran and felt strong. It was perfectly suited for a light clean up, some light updating of the driving bits, and then the fun. 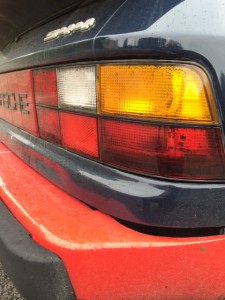 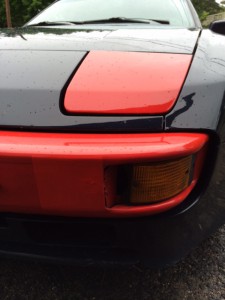 But lately, something is starting to happen. I was driving it the other day and heard a fluttering mechanical noise coming from the front passenger side, it seemed. It wasn’t constant. It only happened while moving. It didn’t happen much in first gear. It happened sporadically in second and third but not much in fourth or fifth. At first it sounded like a piece of bodywork was loose. But then it got more urgent and mechanical. Wheel bearing? I haven’t done those yet but am planning to. But would that overheat the hub and cause some major headaches? At worst a fire in the wheel maybe? I do carry a fire extinguisher at all times in nearly all my cars. A tire delaminating and pieces flying off? The tires that came with the car seem good but I haven’t had time to research the production date yet to know exactly how old they are. A belt? Like most 944 owners, I live in dire fear of some belt or other breaking. The timing belt is an instant catastrophe so it wasn’t that one. But what about the power steering or AC compressor or alternator?? So many potential things to worry about! 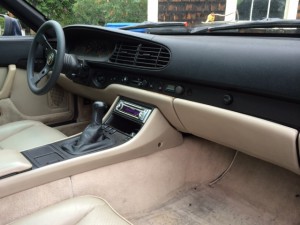 I had my kids in the car and was driving to Roger’s Tires in Woonsocket to pick up my newly repaired rear tire that acquired an unwanted screw in the tread a couple weeks ago. I got in one morning and noticed a different ride (old cars require constant vigilance, it seems) so I checked the tires. One looked a bit low so I got my gauge – 14.5psi. Yeah, not good. With a quick check, the screw became an instantly obvious persona nongrata. So here I was heading to an auto repair place with an auto that very much might need repair. That at least made me summon the courage to driver her gently to Roger’s and do the first inspection there. At least they might be able to help me with what I found. 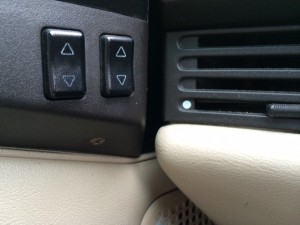 So I limped to Roger’s, hopped out, and took a look. The front tire was ok, thankfully. No signs of delamination or damage. I pulled on the bodywork. It was about the same as it ever was. The front bumper on that side has obviously gotten hit at some point and looks fairly straight now, but some of the connection points to the chassis behind the fender are missing. But that didn’t seem to be the issue. Nothing obvious. I put the repaired tire in the back and decided to limp it home to check it out some more. 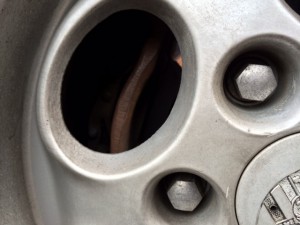 It made it home with the same noice but no real drama. At no time did the car feel much different to drive so I was starting to think it was something not so serious. At home, I popped the hood to take a look and my leg hit the front license plate. The plate shifted as my body pushed it and there was the aha moment. I’ve got some thumbscrews holding the plate on and it looked like they loosened up. I tightened them up and thought, “well, what are the chances that this is it?” Well, that was it. And my concerns vanished enough to know that the next drive was going to be one where I would be able to push the car again and let it have some fun. 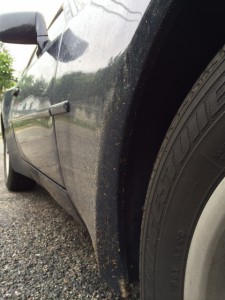 But I am starting to learn that as I invest time and love into these cars, they can’t stay as simple beaters to me. They grab a little piece of my soul and hold onto it knowing it will garner them a share of care and attention. And it works every time. Mechanical things will never be more to me than my kids and my family and my friends. But in some ways the trust we put into our cars to keep us safe and to help us live our lives puts them into their own special category. In this category, I can appreciate the patina and the flaws, but I also want to be able to trust and rely on it too. And when it confirms that trust and delivers as promised, I can’t help but appreciate them as something far more special than the sum of their nuts and bolts and sheet metal. I would now be very sad if this car seriously breaks on me. They really do take on a personality and desire something from us in return. 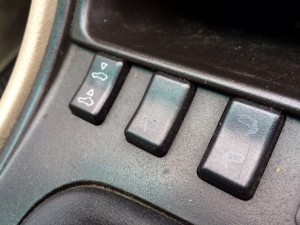