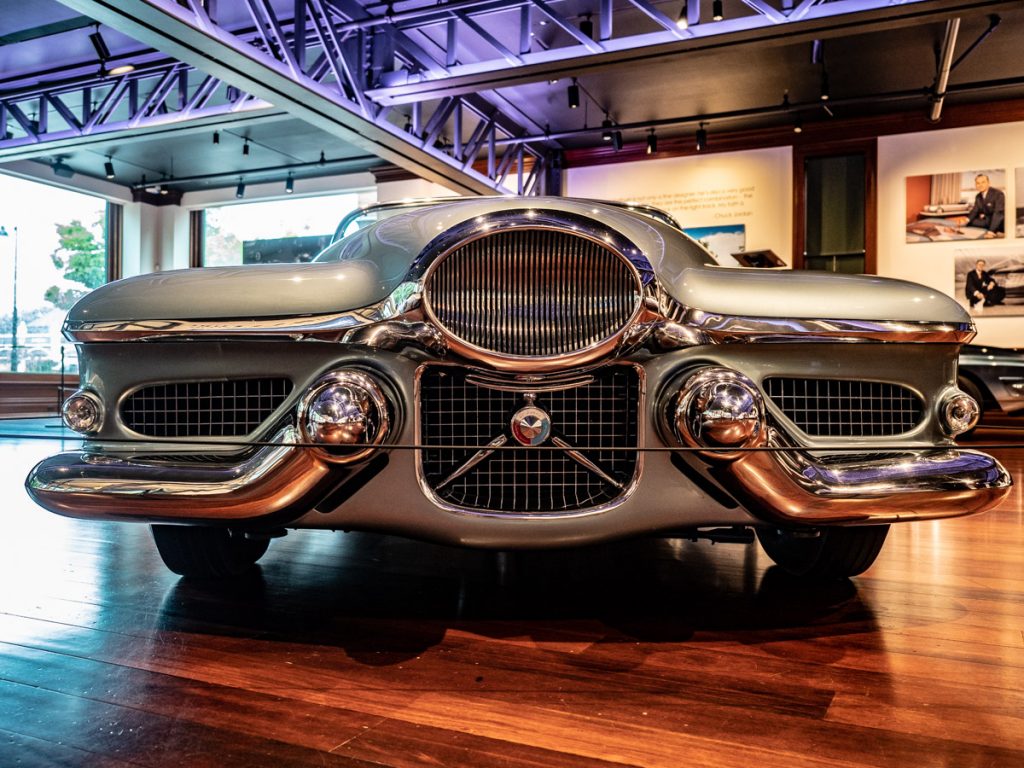 Styling The Future at the Audrain Automobile Museum

What happens when you mix jet fuel, astronauts, hot metal, and a spark? It can either be really good…or really bad. Case in point: 1950’s concept cars. The Audrain Automobile Museum’s current show is “Styling The Future: A History of GM Design & Concept Cars” It’s an incredible display of crazy ideas from a time when ideas could be unleashed at what I would argue might be the most optimism-fueled period prior to the last decade.

I should set the stage a bit by saying I’m not a huge fan of concept cars. I find that I’ve been burned too many over the years. The gap between a designer’s no-holds-barred approach and what usually becomes of it by the time it rolls off the assembly line is…well…usually very disappointing. My initial enthusiastic responses are so often dashed to the rocks. So much so that I spend very little time looking at the idiosyncrasies of these flights of fancy, often to prevent the inevitable let-down that comes later in the sobering moments of reality.

But I will say that looking at crazy concept cars from a historical perspective helps to put salve on the wound. The passage of time removes the anticipation for the future and allows direct comparison to what is already behind us. The gained perspective allows me to pick out some of the elements that did make it through, laugh or marvel at the parts that didn’t, and get a bit wistful at some of the truly mind-blowing parts that were way ahead of their time.

Examples? The rain sensor that automatically puts the convertible top up in case of rain on the LeSabre concept car from 1951. I can’t even count the number of times I’ve left side windows open on a summer day to clear out the heat and then forgot about it when my head hit the pillow only to wake in a panic at three am as the rain shower (or downpour) starts, grabbing for my keys and running outside in my skivvies to close up the car. What I wouldn’t give for my cars to be smart enough to just close their windows, let alone the convertible top! That feature on my Boxsters would have been amazing. Why is no one doing this in 2019?

The Aerovette on display has a rather shouty V8 mounted mid-ship now but it originally had a four-rotor Wankel rotary engine in there making some serious power. You could say this borders a bit more into the show car flummery dark side as rotary engines are loved by a few and largely written off by everyone else. They are technologically cool, very smooth, achieve very high RPMs, and sound like nothing else. They are fairly compact for their power output. But the fuel efficiency is abysmal as they actually have huge displacement inside the rotor lobes and the seals are a perennial headache. They are very complicated and a bit fragile. But I’m not sure if there has ever been a four-rotor production car – ever. This one had 400hp! That alone makes this car pretty special for me. Ok, you caught me drooling over a bit of unobtainium again.

The aero features and aero design features – can you be a car person and not drink these in with wanton abandon? Wings! Wings galore. Look at this 1958 Firebird III! Just the thought of driving a car with what looks like genuine aircraft wings down the road…wow. Anticipation of takeoff would make every mile so exciting that I’m not sure I’d ever want to get out. For all you mythbusters out there, yes, I know that the wings don’t really function in meaningful ways on these cars. I spend a decent amount of time in race cars and studying the reasons behind why Formula 1 has been woefully somnolescent for the past few years (too much aero). I’ve got enough engineering behind me to look pretty skeptically at an active surface and start the computational fluid dynamics analysis in my brain (not accurately, of course). These concept cars don’t spend much time in wind tunnels so my expectations are low regardless. But let’s focus on the fun! How much fun is it to see those crazy wings on your car! The looks you’d get from the children as you drive past – priceless!

So far, I’m not being very convincing in my conviction that show cars are inherently unappealing due to their nutball nature. I will say that the Cadillac Cyclone from 1959 embodies the full gamut of reactions from me. To say it’s gorgeous would be a stretch but it’s got many appealing aspects. The two black pods that protrude from the front like missiles contain proximity sensors that alert you to possible collisions. I like the sensors on my Cayenne that help me not have to rub my way into parking spaces. I know it’s a bit lazy, but it’s also a bit   comforting. I’m glad I don’t need missile pods poking out to accomplish that task in 2019. The jet-exhaust tail lights are achingly beautiful. Full stop. One of my favorite details on any car ever.

But let’s talk about the passenger compartment. There is a bubble you sit in. You can’t roll down the windows. The designers for some reason though people outside the bubble might want to communicate with you while you are inextricably trapped inside this bubble while in the car – so they put in an intercom system! Yes, you can “talk” to the world, mere inches away, from your encapsulated dome by way of a microphone and speaker. In a nod to practicality, they lined your special bubble dome with vaporized silver to block solar rays to make sure you’re only medium rare by the time you are done intercomming with the valet and finally want to get out. But the gently horizontally-sliding doors that reveal full access to the footwell and easy ingress/exit? Brilliant. And probably incredibly unsafe. This car is full-concept-crazy. And yet I find myself completely drawn to it.

In the realm of concept cars that I think should have been built as-is – from a slim field of choices – I’d include the Boxster concept that came out before the real deal – and the Cadillac Sixteen that is on display. Cadillac is an interesting love-hate brand for me. I want to love Cadillac for the history and for the fact that it is really America’s pinnacle car brand. Cadillac products should be the creme-de-la-creme of not only America’s cars but, really, the world’s cars. There will always be a boutique or small manufacturer like Pagani that will produce things that have their niche. But, to me, Cadillac should represent the full force of General Motors’ cadre of top-notch engineering and design talent – widely thought to be some of the brightest stars in the world. So why isn’t it the American Rolls-Royce slash Bentley slash Mercedes S class rival that it should be? The Cadillac Sixteen concept seemed to signal to me that they finally were ready to go toe-to-toe with the best real production cars out there.

With proportions that call to mind the Duesenbergs of old and a V16 engine that is utterly gobsmackingly unique. It has 24 inch wheels! Talk about a halo car. And the design was bold without being polarizing. I find the CTS angularity to be inelegant and a bit cartoonish, personally. But this Sixteen shows enough elegant restraint that I find it to be worthy of a place near the top. We won’t talk about the frontal view which lets it down a bit in my opinion. That needs a little more drama. But, all told, phenomenal car that should absolutely have been produced. Cadillac has seemed to wither and wallow a bit since this concept was shown in 2003. This car still gives me hope that the next Ed Welburn hiding somewhere in Cadillac will step up and knock it out of the park. Here’s to hoping!

Of local flavor is the gargantuan 1931 Cadillac V16 (sound familiar?) that was originally delivered to a certain Mrs. Augusta Little who lived on Thayer Street in Providence, Rhode Island! This car has serious presence. It feels a bit old-timey to me now, to be honest, but there is no denying that the style and scale of this vehicle in the 1930’s must have been astounding. It’s still quite impressive today. It has a 7.4L V16 motor that made 175hp and 320lb-ft of torque. I’m sure it needed plenty of torque to counter the fact that it is not svelt. 0-60 in twenty seconds! Between the local RI flavor of this car and the legacy it would have in the Cadillac Sixteen above, this was a special thing to see. Oh, and it was also a very early example of the work of famed designer Harley Earl, to boot.

I’ve covered just a few of the cars on display. Each one is so interesting to look at, learn about, and photograph that I spent over an hour and a half at the museum and felt very rushed. This show packs a ton of information into something that looks more modest on first glance. I can’t recommend highly enough that you go see it in person. You’ll really be missing out if you don’t. Be stylish. Be futuristic. Go see the show!