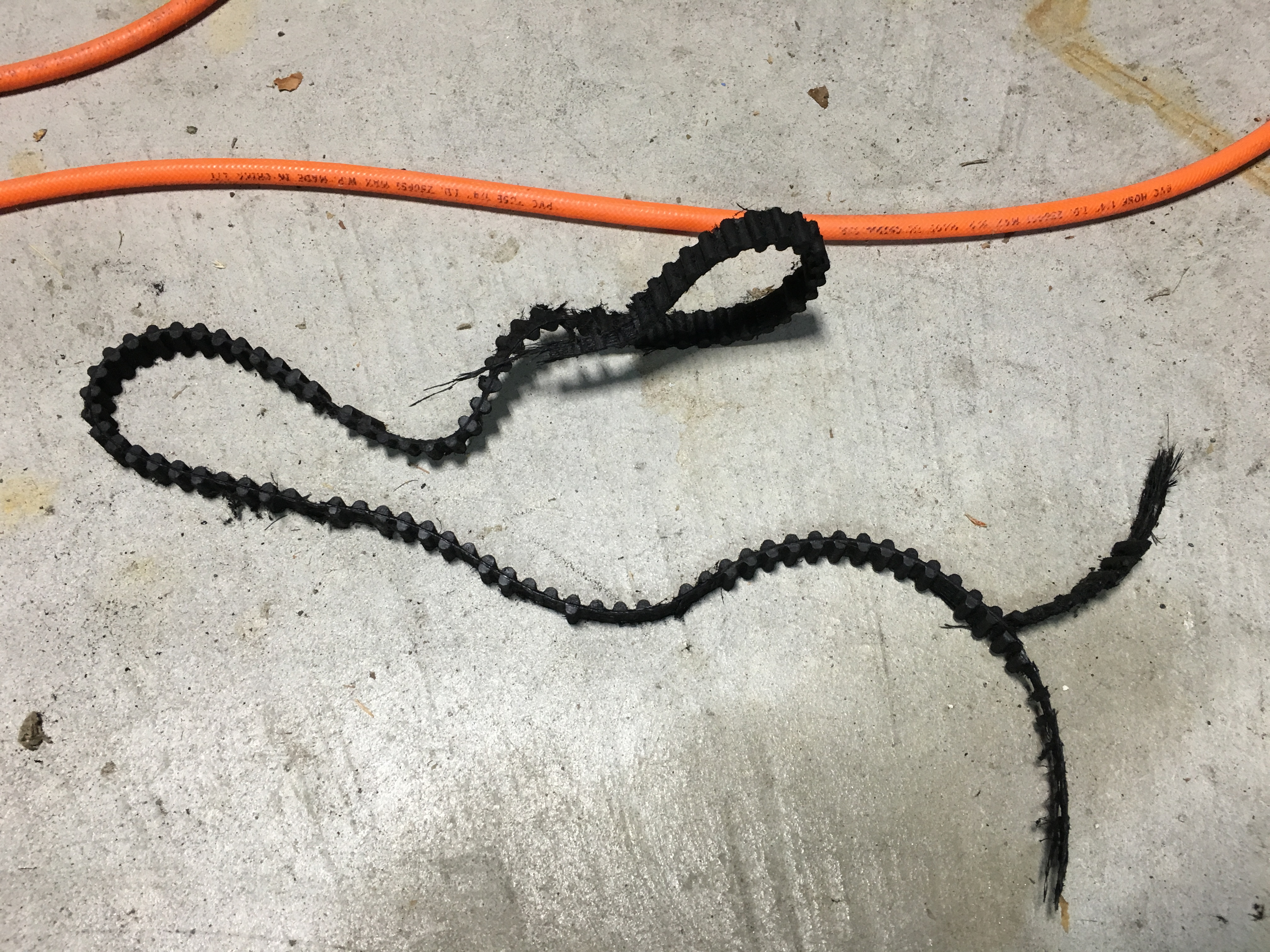 Yes, the cooling system. As I feared from the start. Based on my experience with my 1964 T-bird, cooling is almost always the problem with old cars. And it’s often the problem with race cars and high-horsepower cars too. Heat dissipation is a constant battle in any motorized vehicle.

So what happened? One day, I had packed the kids into the 944 and took them to the swim club. We had a nice time splashing about and then it was time to head home to make dinner. I drove away from the club and the car eventually started to make some odd whining noises like a belt was slipping. Then I smelled a bit of toasted, melty plastics and rubbers. I glanced at the gauges and the temp gauge was off the charts high and a red warning light on the dash was on. I was stuck at a light so I couldn’t shut it down immediately. I waited an agonizingly long time for the light to turn green and then pulled into the nearest parking lot. 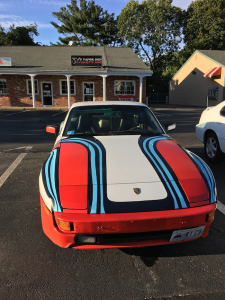 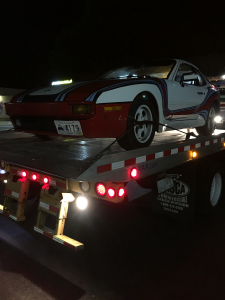 I popped open the hood and noted that the cooling fans weren’t running. Odd because I just replaced one of the fans – which was seized up a while back so I sourced a replacement. In that process, I learned that each fan has it’s own fuse. So this time, I checked the fuses first. Seemed ok. There is also a relay in the mix. But I had no tools with me and I can’t really troubleshoot relays just yet. So I knew I was stuck. The rate at which the car overheated – literally within a mile or two of were I started driving – suggested that this was more than malfunctioning cooling fans, through. I hadn’t really been in traffic so the radiator would be getting air. This had to be more serious.

My guess was that the bearings in the water pump had seized.

One great thing about Uber is that in times like this, getting home with kids need not be a debacle. Sitting on the side of the road waiting for a tow with two kids…who would get hungry…and would need a bathroom…yeah, nope. Not fun for anyone. So I had a lovely ride home so I could get into a different car and head back to meet up with a tow truck later.

AAA finally did arrive. Later. Much later. But a free tow is a free tow. The 944 was dropped in my driveway so I could proceed to do the big service I had been dreading – belts, rollers, seals, water pump. These items are expected.

Instantly, I ordered up the Stage 3 Porsche 944 timing/cooling rehab kit from Ian at 944online.com. It’s so nice that Ian and Steve keep the torch (and parts) alive for these cars. Within days, the box arrived at my house with all the mylar seals, bolts, water pump, idlers and pulleys that one could want. Game on. 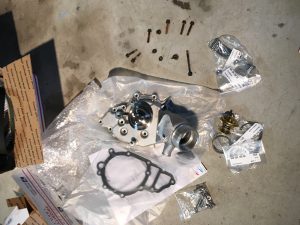 I rolled the car into the back corner of the barn on those metal car roller things you can buy. Got mine from Harbor Freight. They are horrible. But so it goes. My back was hurting just from pushing the car around the barn. 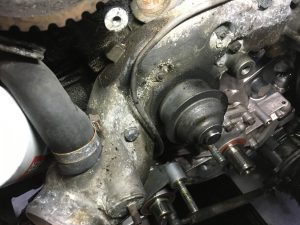 But then it was time to pull it apart. It turns out that the water pump is probably original to the car (and completely seized). When I called Ian to ask why the cam idler he sent was a different size from the one I removed, his response was, “Oh, you must have the old style water pump. I haven’t sold one of those in…maybe 20 years! You need to cut the cover for clearance.”   The timing belt looked decent but the balance belt was clearly gone. The seals look to be original (and bad). But there were no gaskets in places that probably had original gaskets. It looks like maintenance with this car was a mixed bag. I didn’t expect more, certainly. But car forensics/archaeology/genealogy is a bit fun and interesting.

Getting it all apart was a challenge. A 1 1/4″ (yes, inch) wrench was needed to pull the shaft for the distributor. Van Svenson‘s tip about angled pliers was a good way to get balance pulleys off. The hard part was cleaning up the parts. With oil and grease leaking all over for 30 years…it was a mess in there. But it all came out, got cleaned, and got resealed and replaced. 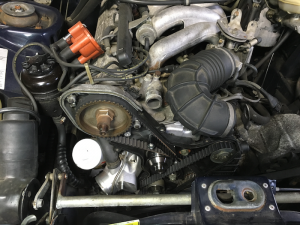 Putting it all back together is a dangerous joy. You just want to hear it fire up again. But you have to remember all the details. To torque all the bolts. To replace all the caps and covers. And then there is belt tensioning. Even with a tensioning tool, I still think that it’s more art than science. And for an ’80’s car, I love that.  And the engine has never been cleaner. So that’s something to admire and enjoy.

And I’ve had my hands that much closer to the belly of this beast, to really understand and appreciate the engineering and thinking that goes into a Porsche. There is a reason why smart people choose to fix these things as a career. Each new thing you see provides appreciation for the art and science that goes into these machines. They aren’t inexpensive. And they don’t pretend to be overly simple. But they have a way to draw you in and steal your heart through your brain. And who wouldn’t love that?

After final assembly, I hopped in and turned the key. Lights on but no start. Starter wasn’t turning over. My starter electrical posts are ancient and corroded so I fiddled a bit with them. Another turn of the key and bam! It started. Time to get all the final bits back in place. I let the engine warm up a bit and noted quickly that my oil pressure gauge now appeared to be working….but it was giving me a big warning that there was no pressure! Do I trust the new oil pressure sensor sender…or is it broken or miswired? I checked the wiring. Seemed ok. And it moved far more than it ever did with my old sender which must have been broken. So…shut her down and do some research. It turns out that the oil pump is driven by the bolt that runs through the pulleys for power steering, balance shafts, and timing off the crank. And if you don’t torque that bolt to 150 lb/ft, the oil pump doesn’t function! In order to torque that bolt down some more, I needed to once again remove the starter, pull the radiator cooling fans, and the airbox support. Two steps forward, one back.

Luckily my torque wrench goes right up to 150 lb/ft. I cranked it nice and tight, trying to be careful to center the power steering pulley (not easy). Got that done. I figured I’d get the starter in place and reconnect the battery to retest without putting back the fans. I fired her up once more. Some wheezing/clicking noises again and the gauge glaring red light at me. And then suddenly, the light went off and pressure jumped up to 5 bar. Phew! Problem solved. Now it was time to recheck the cooling fan operation. I had tested the relay by using some jumpers on the thermofan switch and the fans worked so the relay was good. The switch was brand new so I had hope it functioned. As the temperature of the car climbed, it would go back down without the fans kicking on. Odd. It did that a few times. But finally the fans did kick on. I think there still may be some low temp, single-fan situation that should be working that isn’t. But the major stuff got sorted.

After all that, I finally put everything back together and took her out for a spin. Generally good. But there is a bit of a whine noise that changes with RPM. I think I’ll have to get it looked at by someone a bit more experienced than me. The blunt work is done. Now I’ll let an expert do the final tuning, perhaps.