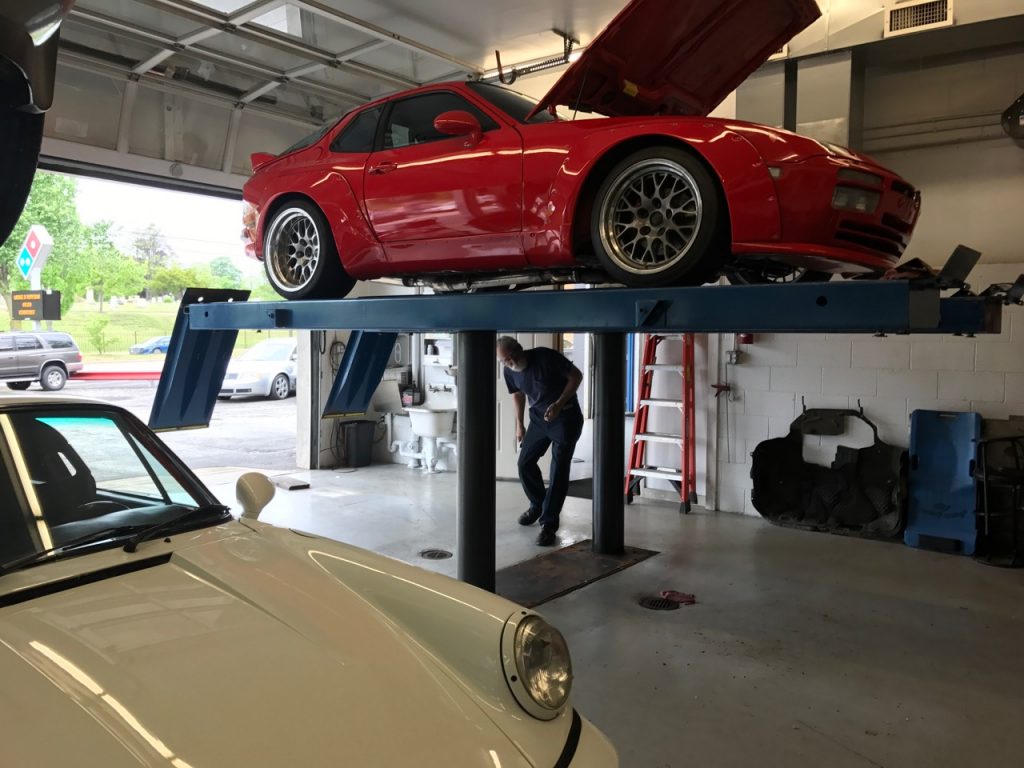 Shortly after I added the red 1986 944 Turbo to the collection, some friends dubbed her “the Red Dragon.” And so she has been called ever since. As you know from my previous post, I bought this car sight unseen from a gentleman named Karl in Pennsylvania. He dubbed it “the ultimate track 944.” So was it really? I was about to find out.

Since having started driving on track with the Northeast Region of the Porsche Club a few years back, my passion for cars and track driving has grown exponentially. I started with autocross before that – and it was phenomenal preparation and education for track driving. Being able to get to a car’s limits, at speed, and then exceeding them with a spin – but without crashing into anything – well, it’s the best way to learn car control. Once you get onto a track, spinning can be a bit more hair-raising. I could go on forever, but we’re here to talk about the car so my point is that I learned “drinking from the firehose” for the past few years – so much info crammed into a short amount of time. I learned about car control, chassis dynamics and weight-transfer, tire (pressure and maintenance), suspension, braking, cooling, and so many other things that need to go right for you to have a good track day. It was time to apply those lessons.

“when I take in a car, I always have to assume it has some tragic flaw that’s not necessarily readily apparent but vexed the prior owner enough to become a prior owner.”

When you buy a “track car” you might be tempted to assume that things are in track-ready shape. But you’d likely be wrong. There is always a reason people are finally convinced to part with cars. I’ve parted with very few in the last few years. They become like family after you’ve shed blood and tears (and money). When you let them go, it’s not easy. So when I take in a car, I always have to assume it has some tragic flaw that’s not necessarily readily apparent but vexed the prior owner enough to become a prior owner.

I put the Dragon up on stands and took the wheels (nice Fikse units) off to get a look at the suspension and brakes. The car has stock brakes – no surprise there. 944 Turbo brakes are reasonably good. The suspension has been changed to cup-style coilovers. You rarely know exactly where parts like this came from or what life they have led before you. I’m lucky enough to have some KW three-way units kicking around as backups for this area. These units on the car are adjustable for ride height…and it looks like prior owners made those adjustments with a jackhammer. The rings are beaten to death. Not a great sign as there are specific tools for adjusting the rings that cost very little. If they cheaped out on these items, heads must be scratched. But they felt ok in primary testing.

I did want the car to be very flat on the track so I ordered up some M030-option-code sway bars front and rear to add to the car. These parts are so easy to swap on these cars that it was a no-brainer. 30mm of front and 23mm rear. Turns out the rear was already 23mm, if I recall.

The tires are R888’s. Pretty good rubber for track use. The date codes were relatively reasonable, but they definitely weren’t brand new. Good enough to get rolling, though. Cooling looked generally ok and shifts were decent. The car ran ok. Better than ok, really. It was a bit scary on the street if you were generous with the throttle. Luckily, the whooshy noises come on fast and loud. That is your alert that all hell is about to break loose and you better be ready.

Mechanically, it seemed reasonably sound. Next up was safety.

A fire extinguisher is very cheap insurance for any and all old cars. I highly recommend them. I bought an adjustable bracket for under the passenger seat and bolted it up. It was fiddly but got done. As I examined the harnesses, it dawned on my that someone must have either not installed or removed the sub belt part of the harnesses. Hmm. Not good. I was planning to redo the belts regardless just for looks and peace of mind. But now it was going to be a bit more involved, most likely. Since safety was one of my primary reasons for buying the car, I decided that I needed professional help. Reassurance, really.

I called up Nick at Flatout Motorsports in Mendon, MA to see if he could check over the car’s belts, cage, and general safety. Up she went for drop-off together with a fresh set of Sabelt harnesses procured from my race-school-instructor, Taylor Handwerk. I thought this might be pretty quick and easy but the slippery slope factor kicked in pretty fast.

Nick’s crew checked out the car, having recently set up another 944 for track use. I had them do the belts (adding the subs back in), alignment and corner balancing, and they had an old race dash setup on a shelf that they could install for me for “short money” – and that would give me the data and analytics from sessions I’d want to learn more quickly! Big win right there so into the pile it went.

Well, the pile got pricey pretty fast, but pickup day was pretty happy for me. It was just a short time until the Dragon would make her first trip to a race track – Thompson Speedway – for the opening day of the 2018 track season.

Next time, we’ll talk about how that went! Until next week!