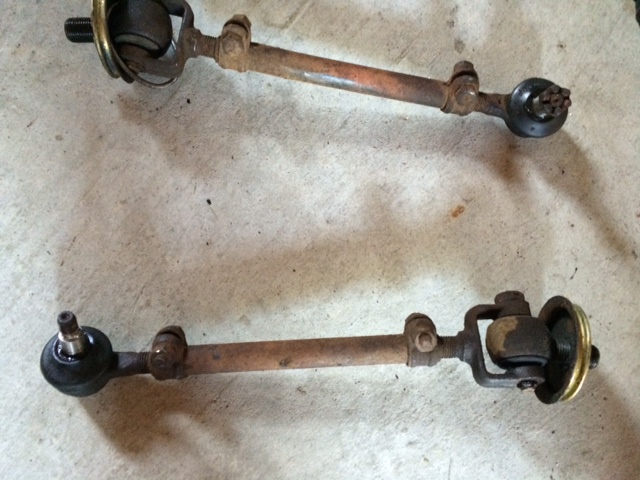 out with the old, squishy tie rods and in with the new

The first major wrenching project on “Signal”, the Porsche 914, is one of convenience really. I had the parts in a box and I knew it would be better when done. I thought it would be a fairly quick and easy way to get to know the car. Turns out it was a good way to learn about the car. But it was not so quick nor so easy.

First off, if you don’t know too much about tie rods, the basic definition is that it connects the steering rack (in this case a gear-driven box that translates turning the steering wheel into side to side motion to turn the front wheels known as a “rack and pinion”) to the wheel hub assembly (brakes, rotors, wheel, tire, etc). It “ties” the track to the wheels. The rack is up in the belly of the car and the wheel hubs both turn and go up and down. So you need something that “ties” it together but that also can handle all this movement. So it becomes a very fancy thing that needs two joints to be able to handle the movement. If it didn’t have to move up and down and change the angle of motion, it could be a solid, straight bar. But it does. So we have two joints on it so it can do its job and manage the angles. The old tie rod has a normal ball joint at the wheel side (the “tie rod end”) same as the new one. But at the other end, the old tie rod has an angled hinge type joint with rubber bushings.

The new one has a ball joint in that location for a totally solid connection. The ball joint gets covered by a new rubber dust cover where the old tie rod’s hinge joint was left open to the elements making the rubber bushings go soft and spongy over time. And soft-and-spongy is not what you want out of your steering experience.

So under the car we go. First we have to remove the belly pan that covers the steering rack. On this car it also covers the fuel pump and filter as that was relocated here by the prior owner. Probably better to have it here than under the fuel tank where I think it was originally.

I started on the passenger side. I took the wheels off and figured out my plan of attack. I figured things were going to be a bit rusty and tight after 41 years. And I was not disappointed. Some PB penetrating oil was used early and often. I’m just about experienced enough to realize that patience is a virtue. So I sprayed the likely culprit bolts with PB and let them sit for hours. Even overnight. Brains over brawn. The younger wrenches would wait like five minutes and then have at it with the spanners. I’m too old for that garbage. Soak and sit while I do other things is fine by me.

The top nut where the tie rod end connect to the wheel carrier is interesting. It is bolted on but there is a hole in the bolt where a metal clip is pushed through to presumably stop it from turning any more. Mine was seriously rusted and wasn’t coming out in one piece. So I deemed it sacrificial and tried to pull it with some pliers. As predicted, it did not come out in one piece. I banged a socket over the bolt and gave it some torque and just muscled the bolt off, shearing the rusty clip. I knew it wasn’t going back on so it proved to be the right choice.

Next up was removing the spring clips that held the old rubber dust boot in place. Not hard but a bit fiddly. Those little springs are strong. There was one at each end of the boot. I knew we had to reuse the inner one so I carefully pulled it off the boot and over onto the steering rack. The springs would proved to be a nemesis. I pulled the other one and just let it hang.

Then came the moment of truth – getting the tie rod out of the rack. There isn’t easy access to turn the rod. It’s in a tight space with brake lines and fuel lines and bodywork in the way. The only good thing about the hinge joint is that it looks like something to grab onto to turn the rod a bit. But that portion is way inside the car so you can’t get a right angle to crank on it well. The old rod had two length-adjustment bolts on it so those looked like potential grab points. And the tie rod end is a 90 degree angle unit with easy access. But it has a greased ball joint on it, so not perfect. I ended up trying every one of these as leverage points. And I’m still not sure which one did the trick, really. I’m thinking it was putting an adjustable wrench on the hinge joint and cranking like hell that broke the friction. But I cranked hard on the length-adjustment bolts too. It was a royal pain. Once I got it off, I notice that there is a disc on the bolt end of the tie rod that screws into the rack that acts like a washer or another bolt. It probably wasn’t making my life any easier to I filed that info away.

With the old rod out, I had to try to get the new one to be roughly the same length as the old one to make sure the alignment wouldn’t be totally poor before doing the necessary alignment. With two joints and all the man-handling the old tie rod went through, I knew it wouldn’t be an exact science and settle on what I thought was close enough. Turns out it was pretty decent.

I screwed the new rod into place, but tightening it is yet another challenge. You supposedly need a special thin 32mm wrench that you can buy from Porsche or find oddly in bike shops. My patience wasn’t up to that task. So I pulled out the amazing adjustable pliers from my old 1988 Saab 900 Turbo, which are about all I have left of the car sadly, and got things pretty tight using the wrong method.

The reason for all the measurement before was that to get the new rubber boot over the new tie rod, you have to take the tie rod end off completely. Do that without any reference point and your front wheel toe settings (part of the alignment) will be chibbed completely. To much toe or too little toe will affect stability and really scrub rubber off your tires. For the 911, I run no toe in the front and just a hair of toe-in in the back. I don’t even know what front toe either way will do to the car’s steering and handling traits. And I don’t really want to know too badly unless I find some expert article about it online.

Then the boot goes on. Getting in over the rack end was fiddly and not easy in the confines of the small area its in. But getting the damn springs on was pretty much impossible. Did I contemplate zip ties. Oh, yes. Many times. But I slowly worked at it. Using a screwdriver. And car-interior plastic prying tools. And my fingers. What a pain. And I never got it quite perfect, unfortunately. Thankfully its pretty accessible so I can check it again after driving a bit to see if the boot is affected by having about half the spring in place. I looked at the driver side and winced. Not only would I have to do this all again, but there would be the master cylinder and brake lines totally in the way on that side. Ugh. Time to summon the intestinal fortitude and soldier onward.

The outer end of the boot was a pain too! The plastic interior prying tools again helped out and I got those seated well. I though about zip ties here since the spring clips weren’t to be used here. But its so tight that I figured again that I’d check things later to see where they stand without it.

Then I just had to screw the tie rod end back on and attach it to the wheel carrier. That crazy castle-looking bolt needed a new metal clip to hold it in place. I had some copper wire of about 12 gauge kicking around so I cut a piece of that and put it on. I’ll have to do some research to see if I should use safety wire or something else instead. But one side down and one to go. 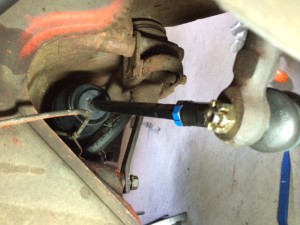 I got smart on the driver side and after removing the rubber boot a bit, I saw from my prior experience that I could work at the boot-holder disc between the tie rod and rack a bit to loosen it up, maybe making my life getting the tie rod unscrewed easier. With so much less clearance on this side, I’d take any advantage I could get. And so glad I didn’t do this side first! Like a charm, using a screwdriver in the four, small grooves conveniently cut into the otherwise round disc got it moving a little bit. I was able to tighten it up a touch, effectively loosening it away from the tie rod and toward the rack and that did the trick. The tie rod unscrewed with very little drama. A small win in the project!

I again had to cannibalize the metal clip on the “castle” bolt on the tie rod end but this one went so much more quickly and easily. Getting the rubber boot on did not. With the master cylinder, it was again hard going. I finally got the inner spring about where I could on the rubber boot and gave up the fight. One more thing to double check later. But the rest got together. The master cylinder is looking mighty rusty and appears to be the next thing I’m thinking I’ll have to tackle on this car.

Back on with the wheels. Back on with the belly pan. Lower the car and all done. The steering wheel is again not centered so something is different. But that’s minor stuff. The car goes in for an alignment in a few days and we’ll see how she nets out in her current state.

First major wrenching is in the books.